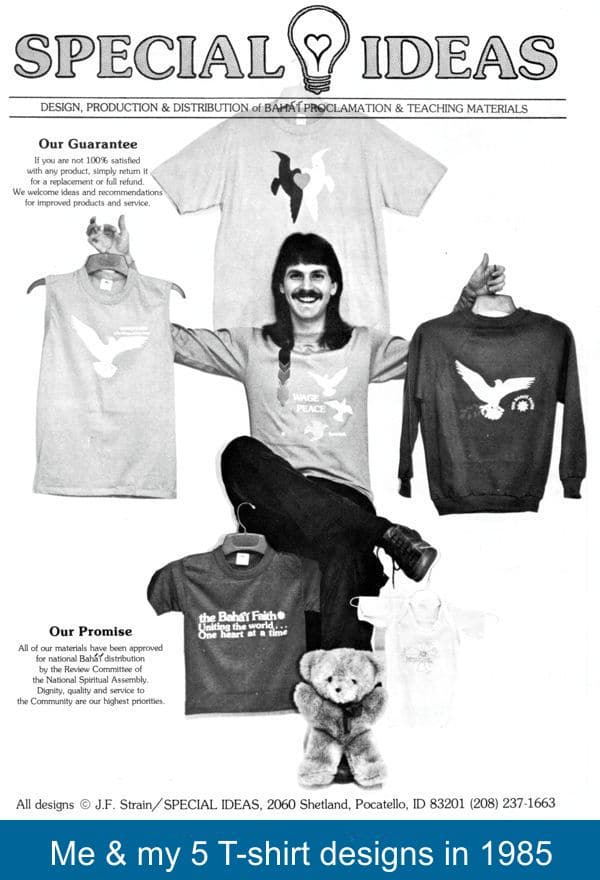 1st catalog from 40 years ago

The Bahá’í Community of Greencastle Indiana, where I became a Bahá’í was focused on one thing: Teaching. It was comprised of nine individuals who had made the sacrifice of moving to a small conservative town for the express purpose of forming an Assembly. They were close-knit, loving, and very dedicated. I was nurtured and deepened in the importance of teaching by Walter & Rhonda Palmer, Bert & Kay Harvey, Lynn [Clampitt] and others. So it was only natural that I simply assumed that teaching is what Bahá’ís did.

My second summer as a Bahá’í, I contacted Mary Kurris at the National Teaching Committee about travel teaching… because that is what Bahá’ís do with vacations, right? I flew around the country in a Cessna Cardinal with a Bahá’í couple and their daughter, watching them give firesides.

The next summer, I borrowed my father’s car and did the same thing, only this time I was the one giving firesides at the homes of John & Sharon Joyce, Margaret Parrott and many others across New England.

Between travel teaching trips, I went to school – ostensibly to study art, but really to teach. The Earlham College Baha’i Club, whose members included Kathy [Staller], Roi and Linden Qualls, Alan Manifold and others, hosted an average of two events per week, plus nightly prayers. I was designing multiple posters to advertise each of these events, and making Bahá’í buttons using a hand-held button maker.

After graduation, I continued to give musical slide shows and give talks about love and unity. One of those slide shows proved to be pivotal. It was in Wilmette IL at the home of Ken and Arlene Jenrich. Kim [Douglas] was there and told me about a job opening at the Bahá’í Publishing Trust that would be perfect for me – helping to design special materials. This was a new department dedicated to everything that wasn’t a book. Perfect indeed! 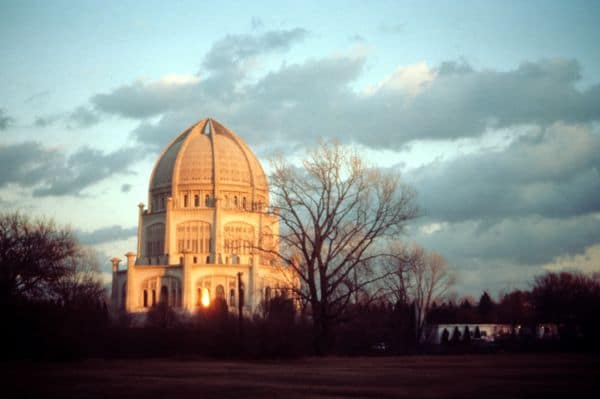 I applied… and didn’t get it (Susan Engle did, and  was great at it). But a few months later I was offered a different job helping to actually produce those same materials. I took it, and spent a year helping create musical albums, cassette tapes, cards, calendars, jewelry, and… no teaching materials. No pamphlets, no buttons, no teaching posters.

After a year of suggesting ideas for teaching materials and being politely declined, I decided that I would be happier going back to travel teaching. But I had learned a lot in that year. In addition to learning how to get thing made, I learned that it was “legal” to make Baha’i materials on your own. There were three independent companies producing Bahá’í materials – George Ronald in the UK, Kalimat Press, and Images International. This was eye-opening, but I was not a businessman, so I had no intention of starting a company.

What I did want to do, however was find a way to fund my travel teaching. To do that, I decided to produce the poster that I couldn’t talk anyone else into producing – the United Doves, Uniting the World One Heart at a Time poster pamphlet. My idea was that if I sold $20 worth everywhere I went, it would pay for gas to the next location. (Can you say naïve?) I had saved enough money to print 20,000 posters along with 10,000 pamphlets and 5,000 button sheets.

I gave notice and prepared to travel. But little did I know how far I was really going to travel. 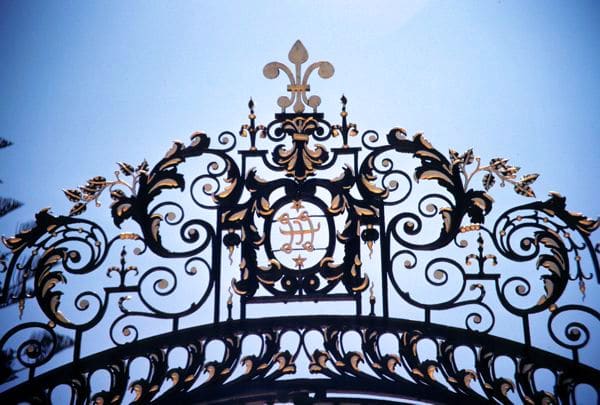 Two weeks before my last day of work, I received a call from the Pilgrimage Office. Did I have my Passport in order? Yes, why? We have an opening for a pilgrimage in two weeks. Would you like to go? Yes please!

But here was the problem: the money I would need for Pilgrimage was the money I was going to use to print my posters and travel teach. So I talked the printer into giving me 90 days to pay, and gave the go-ahead on the posters. Then I went for the trip of a lifetime.

So here I was in the Holy Land, with my plans for travel teaching up in smoke. What did God want me to do? This was the perfect place to ask.

Well, as you may have guessed, I was inspired to start a company that focused on producing teaching materials. It would create unique teaching tools – like posters that had pamphlets on the back – and would market them by explaining, not what they were, but how to use them effectively.  I would produce pamphlets that were conversational in tone and easy to read, with titles that attracted interest. I would include teaching ideas and stories in my catalogs. 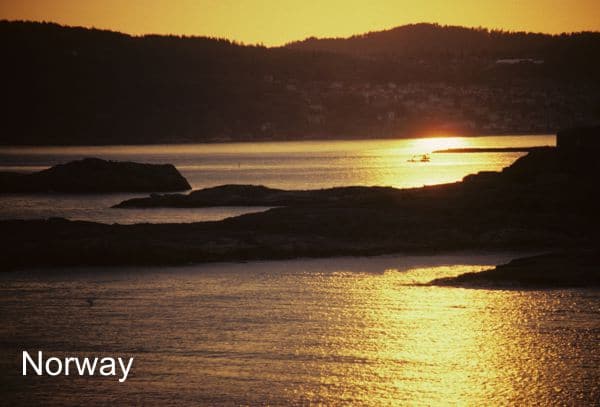 By the way, when I found out I was going to be on the other side of the Atlantic, can you guess what the second thing I did was? That’s right; I contacted the International Goals Committee to see if there were any teaching projects in Europe I could assist with. As it turned out, there was a two-week teaching campaign going on in Norway. So I took a detour on the way home, only to find out that the teaching campaign had been cancelled. That gave me two weeks to fine-tune my ideas for Special Ideas before returning home. (I also decided to host a Wildfire Conference of the Arts, but that is a different story.)

I returned to the same loving, close-knit community I had started in, where I was encouraged and supported in my dream. But a dream was really all I had – and a bill for 20,000 posters and no way to sell them. So I pulled out the addresses of all of the Bahá’ís I had visited during my years of travel teaching and sent out fliers. I also went to Bahá’í gatherings and collected names. 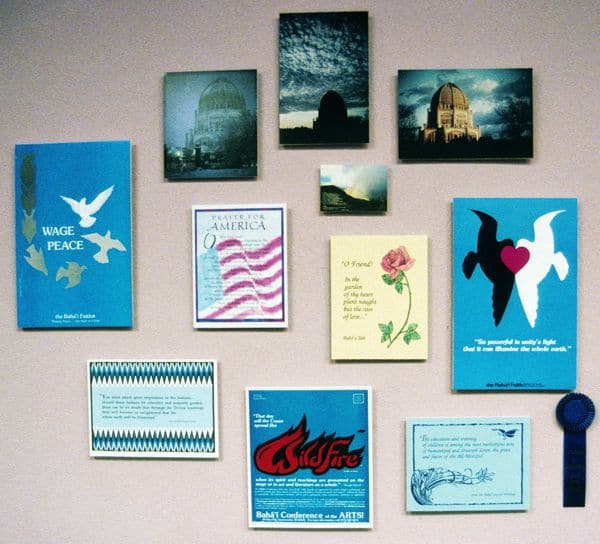 It wasn’t easy.
As I was just starting, I was told by a person in authority that they couldn’t find any reason to stop me from making my own Baha’i materials, but they really wished I’d just get a real job and donate to the Fund instead. Later on, the head of one office threatened to have my rights removed because he thought my (NSA approved) race unity materials were too controversial for a teaching campaign.

But the teaching success of the rank and file Baha’is who were using my materials told a different story.

For example, the Baha’is of Ventnor NJ were used to giving away dozens of pamphlets at the annual teacher’s conference in their area. When they started offering United Doves Poster Pamphlets to attract attention, they gave away 9,500 pieces of literature in one week. Teachers returned year after year to get another one.

Stories like this convinced me that I should continue.

Even so, the next thirteen years were challenging – made even more so by relationship issues that caused me to move my mailing address nine times. In a pre-internet world, that should have been a death sentence for any business, but Bahá’ís are amazingly loyal. People would track me down wherever I was. As my line of products grew, so did my customer base. Expanding my product line was difficult, though, when my income was barely enough to keep me going. I had little left for new products. 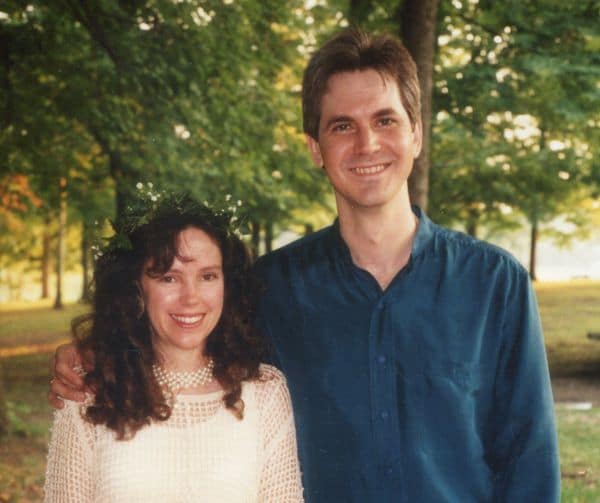 Then came the big turning point. I met my wife, Karen in 1994, fell in love and got married. Not only did she support me and my business emotionally and spiritually, but with a second income, we finally had the money we needed to think big. (She is also more organized, better with money and more computer savvy than I am, which is even more important than the money, but not as important as her support.)

By the end of 1994, we had published our pocket edition of The Hidden Words, which sold out of its 20,000 print run almost immediately. We finally had a “killer app” that encouraged communities who had never ordered from us to track us down. 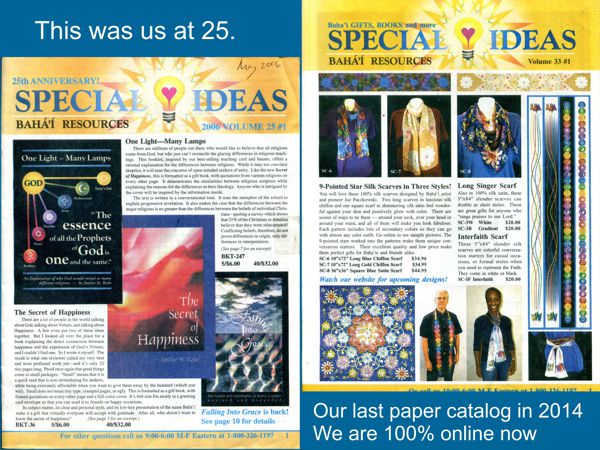 Catalogs from 25th year in business

From The Hidden Words and A Gift of Prayers, we moved into publishing larger books. I tell people that I went from putting quotations on the backs of posters, to writing pamphlets, to writing books without ever thinking of myself as an author. My first major work was Falling into Grace, published in 1999. I knew from my days at the BPT that a “best seller” in the Bahá’í Community meant that it sold 3,000 copies over a ten-year period. I sold 3,000 copies in less than a year. It was the best-selling Bahá’í book of 1999.

During the heyday of the late 1990s race unity proclamation campaign, we expanded to four employees and outgrew our basement, so we built our own 3000sf warehouse in Heltonville, where we still are. Teaching has slowed down a bit since then, so we have fewer orders and need less help. That means that if you call us in the morning, you will talk to Karen, and if you call in the afternoon, you will talk to me. There’s no one else here.  That’s fine with me. Advances in technology allow us to work smarter instead of harder. We still process about 2,000 orders a year, and get most of them out within 24 hours. 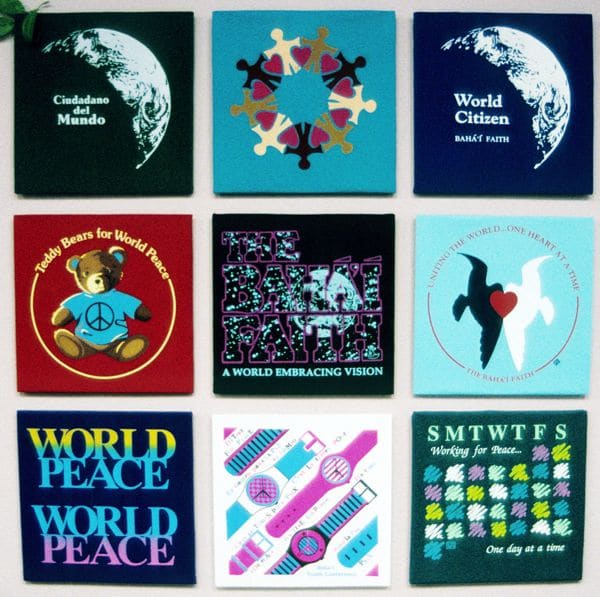 Bahai t-shirts we sold back in the 80’s

In our forty years in business, we have made several million posters, pamphlets, booklets, buttons, T-shirts, postcards, teaching cards, billboards, banners, pendants and pens available to Bahá’ís around the world. I’ve personally created dozens of unique designs and logos, including the United Doves, World Citizen, WeR1 Family, Spread the Promise of Peace, No Room in My Heart for Prejudice, World Peace through World Unity, Celebrate Oneness, I’m a Bahá’í – Ask Me Why, Unity in Diversity and more. We’ve also promoted the work of many other artists, including Cindy Pacileo, Jeannie Hunt, Matthew Levine and Jeffrey Streiff.

Recently, our interest in promoting interfaith fellowship and character development has inspired us to branch out into two sister companies – interfaithresources.com and virtues101.com. This has inspired us to do more “warm & fuzzy” stuff to go with our direct teaching tools. 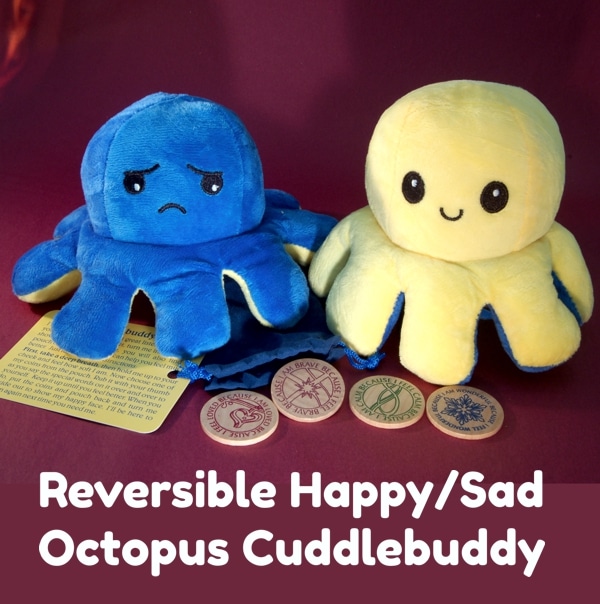 It might seem ironic that I’m producing fluffy stuff when I was frustrated by the Publishing Trust’s focus on things like cards and jewelry instead of pamphlets. After 40 years, however, I’ve come to realize that it all works together. People have to feel good about being Bahá’í before they will want to teach. Greeting cards, flags, games, jewelry, and even silk scarves can help with that.

This shift has freed up a lot of creative energy for me. Instead of only asking “what do the Baha’is need for teaching,” I can ask “what will make the world a better place and the Baha’is happier people.” The possibilities truly are endless.

So that’s my story and I’m sticking to it. I deeply appreciate every single one of our customers. Some have been ordering since the very first flier I sent. I still take orders from people I met while travel teaching in 1977. I know your names, and even recognize some of your voices. You have watched our children grow and sent us prayers and warm thoughts. Thank you, thank you, thank you.
Justice Saint Rain (and Karen too).